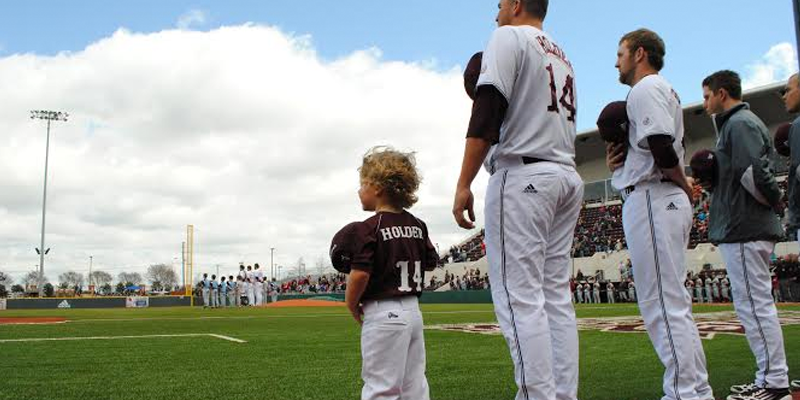 Recently Mississippi State’s blog, Hail State Beat, wrote a great article about how the Maroon Memories program is making an impact on the fan experience.  Here an excerpt from the article:

Sunday afternoon, I was walking and searching all around Dudy Noble. There were about 45 minutes to go before Mississippi State and Tennessee started their final game of the series and I was hoping to catch my favorite pre-school aged fan before the rubber match began.

Nearly everyone at MSU baseball games knows him, or at least has seen him, so he shouldn’t be hard to find, as one of the Diamond Girls reminded when I asked if she’d she spotted him.

“If Reed were here,” Jordyn told me, “you’d know. You’d see him running around and talking to people.”

Reed Sparks, 3 ½ years old, curly blond hair and chubby cheeks like everyone his age, has somehow become one of the most popular fans around MSU’s teams.

“Today,” his dad Ryan told me Sunday, “we were at Restaurant Tyler for Mother’s Day and people would walk by and say ‘Hey Reed!’ I don’t recognize them, but I’m sure he’s talked to them at baseball games.”

Reed, Ryan says, hasn’t missed an MSU football game since he was three weeks old, though he wasn’t able to make it to the one the day after his birth. He’s only missed one baseball game this spring and has made it to nearly every softball, basketball and whatever-other-sport game in between.

Reed has also been lucky enough to have some cool experiences as he’s been showing up to cheer on his Bulldogs.

Creating memories and experiences is something MSU’s athletic department has made a recent effort for, starting at the top with Athletic Director Scott Stricklin, which is why they were so interested when the Maroon Memories idea was presented to them.

And it’s gone so well, they plan to keep the program, expanding it when football begins in the fall.

It would be an upset if Reed doesn’t get involved.

“You gotta love little Reed,” MSU’s coordinator of Maroon Memories Danielle Smith said. “Gavin just picked him up and to see them standing there during the National Anthem – I was a little girl, you were a little boy, he’s going to want to grow up and be a Mississippi State baseball player. He’s going to remember those things.”

Naturally, Reed is just one of many who have been able to have special moments fostered for them.

Smith remembers one particular person who wanted nothing more than to see MSU baseball’s National Championship runner-up trophy in the Hall of Champions. That fan’s mother, through Maroon Memories, set up a surprise visit for her son.

“He took off his hat walking into the Hall of Champions,” Smith said. “He was just so honored to be there, and when he saw the trophy he began to cry. I was just like, ‘Oh my gosh, this is what it’s all about.”